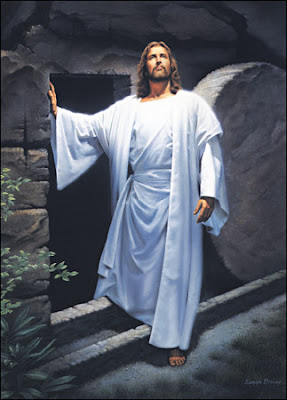 Verses 3 and 4 are the foundation of Christianity. The death and resurrection of Jesus, it is our hope and the reason and ground of all we believe. We looked at the crucifixion and death of Jesus last week. We saw that our salvation and cleansing from sin was because of the suffering and death of Jesus on the cross at Calvary. But what about the resurrection, what does it mean to us. Well, we know that it means everything for the Christian. Because He lives we have salvation and assurance of eternal life.

If Jesus had not rose again bodily from the grave we wouldn't have had salvation from sin. If Jesus did not rise from the dead, then sin prevailed over Him and continues to be victorious over you too. If Jesus remained in the grave, then, when you die you would also stay dead. Furthermore, since "the wages of sin is death" (Romans 6:23), were you to remain dead in your sins, death and eternal punishment would be your future. The purpose of trusting in Christ is for the forgiveness of sins, because it is from sin that we need to be saved. "Christ died for our sins" and "was buried, and ... raised on the third day" (1 Corinthians 15:3-4). If Christ was not raised, His death was in vain, your faith in Him would be pointless, and your sins would still be counted against you with no hope of spiritual life. It is Jesus who gives us spiritual life to us who are spiritually dead.

It says in Col.1:13,14 - “For He delivered us from the domain of darkness, and transferred us to the kingdom of His beloved Son, in whom we have redemption, the forgiveness of sins”. By the power of our resurrected Lord and Savior we have been delivered from sin and our sinful nature. Because He rose from the dead, we know that Jesus is victorious over sin and we who by faith receive Jesus as Savior, knows that He gives us that victory over sin also.

Eph. 2:1-5 shows us exactly what Jesus has done for us and our sinful condition, “2:1 And you hath he quickened, who were dead in trespasses and sins: 2 Wherein in time past ye walked according to the course of this world, according to the prince of the power of the air, the spirit that now worketh in the children of disobedience: 3 Among whom also we all had our conversation in times past in the lusts of our flesh, fulfilling the desires of the flesh and of the mind; and were by nature the children of wrath, even as others. 4 But God, who is rich in mercy, for his great love wherewith he loved us, 5 Even when we were dead in sins, hath quickened us together with Christ, (by grace ye are saved;)”; we see in the first 3 verses that Paul describes just how Jesus has made us alive spiritually from our condemned state of our soul. He says Jesus has made us alive from our trespasses and sins, from our spiritual bondage to worldliness, to the devil, and to our own sinful fallen state (spiritually dead). Jesus defeated and destroyed the powerful affect of sin, destroyed the works of the devil, and has given us life for our death sentence.

Verse 4 & 5 shows us through God’s mercy and love He has made us, who are dead in our sins, alive in Christ. If Jesus is to be called the Lord of Life, then He cannot be held down and defeated by death. Jesus himself told Mary and Martha that He was the ‘resurrection and the life: he that believeth in me, though he were dead, yet shall he live’; Jesus came not to make bad people into good people but to bring us out of our spiritual death into spiritual life. That’s why Jesus said that He was ‘the Way, the Truth, and the Life…’, we were blind and could not see the way, we were living in our life of lies and didn’t know the truth, and we were spiritually dead and lifeless and incapable of having life till Jesus came, died, and resurrected to give us the Way to the Father, the Truth that only He could cleanse us from sin, and Eternal Life is found only by putting our faith into Jesus who is the Lord of Life, victorious over sin, Satan, death, Hell, and the grave. If He was not victorious over death then our faith, our hope, our salvation would have been in vain. If He had not risen from the dead we would have been trapped forever in the bondage of our sins and forever condemned to eternal death.

II. It Ensures Our Eternal Life and Resurrection. (1 Co. 15:18-19 - Then they also which are fallen asleep in Christ are perished. If in this life only we have hope in Christ, we are of all men most miserable).

If Jesus had not victorious over death then death would be victorious over us all. Every Old and New Testament saint, and all the faithful and prayerful saints you've known--every other believer in every age also would be in hell. Their faith would have been in vain, their sins would not have been forgiven, and their destiny would be damnation. But because He is our Living and Risen Lord, we can rest assured in the peace of knowing that we have a ‘blessed hope’ and a resurrection from the dead. Death is not the end for the child of God because Jesus has rose victoriously from the dead. The grave, the power of death could not hold Him. Jesus the creator of life is the Lord of Life and death could not hold Him bound up in the grave.

Without Christ's resurrection, and the salvation and blessings it brings, Christianity would be pointless and pitiable. Without the resurrection we would have no Savior, no forgiveness, no gospel, no meaningful faith, no eternal life, and we could never have hope for any of those things. How could we ever believe His promise that He “would never leave us or forsake us even until the end of the world”, if He never rose from the dead.

To have hoped in Christ alone in this life would be to teach, preach, suffer, sacrifice, and work entirely for nothing. If Christ is still dead, then He not only has no ability to save you in the future, but He can't help you now either. If He were not alive, where would be your source of peace, joy, or satisfaction now? The Christian life would be a mockery, a charade, a tragic and cruel joke. Christians who suffer and even die for the faith would be just as blind and pathetic as those "believers" who followed Jim Jones and the People's Temple, David Koresh and the Branch Davidians, and Marshall Applewhite and the Heaven's Gate cult. How could we believe that there is a Heaven, a place prepared by Christ, or the hope of His promise that our soon returning King would return to take us Home, if He never rose from the grave.

BUT, God did raise "Jesus our Lord from the dead, He who was delivered up because of our transgressions, and was raised because of our justification" (Romans 4:24-25). “Because Christ lives, we too shall live” (John 14:19). "The God of our fathers raised up Jesus, whom you had put to death by hanging Him on a cross. He is the one whom God exalted to His right hand as a Prince and a Savior, to grant repentance to Israel, and forgiveness of sins" (Acts 5:30-31).

We are NOT to be pitied, for Paul immediately ends the dreadful "what if" section by saying, "But now Christ has been raised from the dead, the first fruits of those who are asleep" (1 Corinthians 15:20). As Paul said at the end of his life, "I know whom I have believed and I am convinced that He is able to guard what I have entrusted to Him [i.e. his life] until that day" (2 Timothy 1:12).

Those who do not hope in Christ alone for salvation are the real fools; they are the ones who need to hear your compassionate testimony about the triumph of Christ's resurrection. So don't forget the resurrection; rejoice in it and glory in it, for He is risen indeed.

III. It Ensures that He is the Son of God

In all the miracles and healings and mighty works that Christ did to declare His Deity; the greatest sign that absolutely, positively proved that He was the Son of God was His resurrection from the dead. If Christ had stayed in the grave He would not have been God; He would not have been Savior (because the only One who could forgive sins is God); and if He stayed dead He would been an imposter and a liar. But He was God, He was our Savior and He cleansed our sins by His sinless blood sacrifice on the cross and conquered sin by His resurrection from the dead. You see the wages of sin is death but by His victory over death He destroyed the power and penalty of sin because God the Son conquered death for His children. All of His teachings and promises and words of our Lord are validated by His resurrection. It proves that He is God.

I want to end with this verse; (1 Cor 15:57 KJV) “But thanks be to God, which giveth us the victory through our Lord Jesus Christ.”