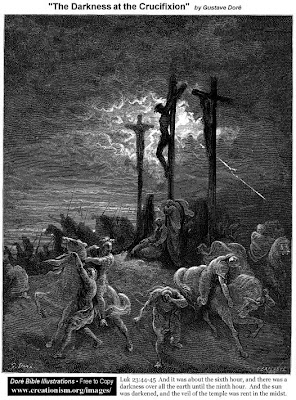 The Crucifixion Of Christ

When reading the passages of scripture on the crucifixion, I kept seeing the suffering of Jesus in my mind as I had saw it in the movie ‘The Passion’. Thinking of the scourging, the beating, and how He was nailed on that cross and saying to myself why it had to be that way. There had been others crucified and scourged and who had suffered, but the difference that day was who was being crucified. Today, let’s look at the crucifixion closer and try to see it better and come away from it with a fresher understanding and a more thankful heart.

I. Before the Crucifixion

A. The Garden (Matt. 26:36-46) - We see here in passage in Mt. 26 that Jesus has come to the Garden of Gethsemane (means ‘Olive Press’) with the disciples. He has come to pray and enters further in the garden with Peter, James, and John. This passage mentions in verse 37 that Jesus is ‘sorrowful and very heavy’, this means that he is grieved and distressed and even verbalizes that fact to these three. He is feeling the immense stress and when He prays, He asks the Father, “O my Father, if it be possible, let this cup pass from me: nevertheless not as I will, but as thou wilt” and later prays in v. 42, “O my Father, if this cup may not pass away from me, except I drink it, thy will be done”. Jesus is not fearing death, the cup is not the cup of death but it represents the wrath of God against sin. In that moment, the sin of the world was being ‘poured’ on Jesus. He was going to bear our sins on that cross and die for our sins in our place; He took the punishment and penalty for our sin for us. 2 Co. 5:21 says that, ‘For he hath made him to be sin for us’, Jesus took our place and took the wrath of God for us. The taking on of the overwhelming weight of the sin of the world was a great stress on our Lord because we see that in Luke 22:34 it tells us that, “And being in an agony he prayed more earnestly: and his sweat was as it were great drops of blood falling down to the ground”, now this is actually a known medical condition called hematidrosis. It is caused by great psychological stress which causes a release of chemicals that breaks down the capillaries in sweat glands which results in a small amount of bleeding in the glands and when sweat is released it is tinged with blood. We see our sinless Lamb taking our sins on Himself and the great weight causes our Lord great stress. He was the only One who could do it.

B. The betrayal and arrest (vv.47-68) we all know the Judas betrayed Jesus for 30 pieces of silver and they came and arrested Jesus and took to the High Priest Caiaphas. The disciples had fled away into the night and Jesus was before the Sanhedrin council and they charged Him with blasphemy for they rejected Jesus as the Messiah. They also pronounced a death sentence, beat, and mocked Him.

C. Before Pilate, the crowd, and the scourging (Mt. 27:11-31)- in chapter 27:11, we see Jesus has now been brought to Pilate. He is questioned by Pilate and Pilate says in the passage from John that he could find no fault in Him. When the crowd was given a choice to release a prisoner by Pilate, he gave them a choice between Jesus and a criminal named Barabbas. The crowd there cried out they wanted Barabbas and when Pilate asked what they wanted to do with Jesus and the crowd cried out ‘crucify him!’. This was probably a lot of the same crowd that had cried out only days before ‘Hosanna’ and ‘Blessed is He that comes in the name of the Lord’ when Christ rode in on that donkey when He entered Jerusalem. When Pilate expressed that he felt Jesus was innocent it says in v. 23 that the crowd cried out even more, “Let Him be crucified”. Pilate washes his hands before them and says that he is innocent of this man’s blood and the crowd answers and says, “His blood be on us, and on our children”; the fact of the matter is that we are all guilty of the death of Jesus Christ and none of us are innocent of His shed blood, it is because of our sins that He came, suffered, and died on that cross. Barabbas is released and Jesus is then scourged and delivered over to the Roman soldiers to be crucified. Scourging was a practice used by the Romans that involved a whip of braided leather thongs with metal balls and sharp pieces of bone woven into them. It was usually consisted of 39 lashes but depending upon the mood of the soldier chosen to give the lashes it most likely was more. Needless to say the flogging would be from the shoulders down the back and buttocks to the back of the legs. It would rip and tear skin and muscle down to even exposure of the spine and bowel. It was a horrible thing to be scourged and many would die just from being scourged and the loss of blood. Then the soldiers mocked him, spit on him, and drove a crown of thorns upon His head.

We now come to the place of the crucifixion; as horrible as the scourging was crucifixion was even more horrible. When one was crucified, they had to carry the cross beam part of the cross called the patibulum to the place where the execution was to be carried out. When they would arrive the vertical part of the cross would already be placed in the ground. They would take the condemned and nail him to part he carried. The 5-7 inch spikes and nailed him to through the wrists. Note that the wrist was considered part of the hand in the language of the day. If it was through the palms, the skin would have torn and would have fallen off the cross; the spike thru the wrists lock the hands in place and was a solid place to secure the condemned. Part of the torture involved in nailing thru the wrists is that the nail would go through the place where the median nerve runs to the hand. It would crush the nerve and cause intense pain; it like the feeling of hitting your funny bone but this pain is constant and it would be like taking a pair of pliers and squeezing and crushing that nerve. The pain would be unbearable and Jesus was feeling that pain. The pain was literally beyond words to describe; in fact they invented a new word for it and that word: excruciating. Excruciating means ‘out of the cross’. They had to make a new word for that intense anguish and suffering felt on the cross. The cross beam was raised and attached to the vertical beam and then a spike was driven thru the feet also hitting a nerve with a similar intense pain as the others. Upon being raised on the cross the arms would be stretched at least 6 inches and the shoulders would become dislocated. Once hanging in that vertical position, crucifixion was a slow painful death caused by asphyxiation. Because of the position of crucifixion, Christ had to push Himself up by His feet to exhale and relax back down to inhale. Eventually a person would die do to being to exhausted to push themselves up to keep breathing. This is the great physical pain and agony endured by Christ out of His love for lost and sinful mankind. And we see in the Garden and at the cross the great psychological and physical suffering Jesus faced for our sins.

Because of the suffering and death on the cross by our sinless Lord Jesus, we are now partakers of His salvation. It is only through Jesus we have salvation, the forgiveness of all our sins. Let us, this week especially remember and give God thanks for the awesome work of redemption by King Jesus.