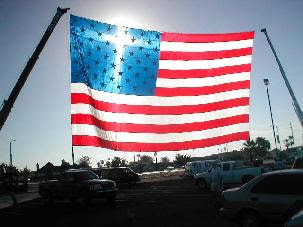 God's Message to our Nation

This statement here in the book of Proverbs is not just made to the nation of Israel, it was made to all nations. I believe that this statement is what God would say to the USA, if He spoke audibly to us on this Forth of July holiday. We celebrate this holiday that in 1776 the USA declared independence as a nation from Great Britain. That we became a sovereign and independent nation and established our own laws, freedoms, privileges, and these rights were fought for and won by our forefathers. One thing our forefathers did was to acknowledge and seek God's divine hand in founding this nation. Although our nation began seeking independence from a oppressive nation and government to self-rule, our forefathers made sure we did not have independence from the mighty hand of God that allowed them to found our nation. Those men who were instrumental in the foundation of this nation saw from history the nations have fallen and failed and recognized unless God blessed the establishment of this nation that it would fail also. Today, we will see if we still heed to the word of God or if we have declared independence from God also.

Let's look at the first word of this verse, “righteousness”. This is a word that we don't often hear outside of a Bible-believing church. You won't hear it from the news media or uttered by one of our politicians on Capitol Hill and certainly not from the White House. This word makes this world uncomfortable because it brings up ideas of right and wrong and that there are consequences for our unrighteousness. There are three implications of the word righteousness that our sinful nation does not want to consider.

B. 2nd Implication: A Standard – to say that there is a right and wrong, good and evil, or righteous and unrighteous is to say that there is a higher standard or a higher law that determines this. It says that there is a God who has given a standard of righteousness. We have that standard and you can hold it in your hands and read it whenever you want to, it God's written Word, the Bible. Today's society doesn't want to have a standard because if reveals their sins and unrighteousness. It declares their condemnation in the eyes of God. That's why our nation rejects God and His Word. Our founding fathers held the Bible and Christianity in high esteem. Sadly, today this nation despises the Bible, God's righteous standard and wants to attack Christianity and silence it's voice.

Here God is saying that if a nation regards and follows His righteousness then he would exalt that nation. To look at our history, we can see the hand of God blessing on us. That we were once exalted as a nation. We once were blessed with greatness because we were good (in the moral sense). Our churches grew and shined the light of the Gospel of Jesus Christ to the whole world, at home and abroad. We used to acknowledge that God was the reason for our greatness but now our nation glories in the ingenuity and determination of the people and it's government. We as a nation must again turn to God and acknowledge that the birth and growth of this nation rests on His divine goodness and mercy for it was by the power of His hands and providence that this nation came into being. Because of God we have been blessed, prosperous, and mighty. His presence has kept us safe and strong during war and disasters, (Ps. 20:7 - “Some trust in chariots and some in horses, but we trust in the name of the LORD our God”), some believe “In Government we trust” instead of “In God We Trust”. But now, for our so-called governmental leaders to ignore and even try to outlaw God's words from being placed or spoken in the places of government buildings is to ignore the humble and righteous beginning of our nation and in the hearts of our nation's founding fathers. The height of blessings for this nation was when they sought to live out the righteousness of God. “Righteousness exalts a nation.”

III. The Revolt and Reproach of a Nation: (“But sin is a reproach to any people.”).

We now come to the worst part of what a nation chooses over God. If righteousness exalts a nation then sin destroys it. Where America once denounced sin and evil in it's society has turned around 180º. Today, people seek out false religions and false gods, they want a religion and a god of their own choosing. One that will fit their definition of a lifestyle and accommodate their particular pet sin. They view God, if they believe in one, as a loving merciful Being that doesn't condemn anyone or their lifestyle. They honestly believe that God grades on a curve and surely would not send anyone to Hell for a sin. Some really want a God that is loving, merciful, and kind and the God of Christianity fulfills that desire. But, the true God of the Bible is merciful and loving but He is also a holy God of wrath, judgment and condemnation. Our society today wants the first part but not the second part. The true God of the Bible is a holy God that must judge sin and the sinner. God does not look over someone's sins, He judges and punishes sin and this world wants nothing to do with that. So now they worship false gods and goddesses and find a tailor-made religion that condones their sins. To admit we are sinful is to admit we have done wrong and cannot live up to the standards of God's holy moral law. His standard for righteousness and holiness is His own. The Bible says in Rom. 3:23 that “all have sinned and fall short of the glory of God”, there is no one who has or will live up to that standard (except Christ). Our nation has decided to not pursue moral greatness anymore. In fact like I just previously said, our society does not honor what is good and right but has turned 180º and now glorifies the sinful and the perverted. We now honor and reward evil. What was good and moral is now considered evil and what is sinful and perverted is now the good. Look at our culture, our music glorifies sex outside of marriage, it glorifies murder and rape and drug/alcohol abuse as a mark of greatness and criminals as being heroic. Our churches once frowned upon and denounced women having children out of wedlock are now just glad that if they don't listen to society and murder their unborn child through abortion. Homosexuality was once seen as the perverted sin as it is but now our country has gay pride parades and the worst thing about it now women are the ones leading those perverted parades forsaking the God given role of being moms to act like men and men acting like women. Don't take God's mercy as God being weak, it says this in 2 Peter 3:9, “The Lord is not slack concerning His promise, as some count slackness, but is longsuffering toward us, not willing that any should perish but that all should come to repentance”, that promise that Peter mentions is God's judgment on a sinful, evil world; it says that He is “longsuffering” which means that He is mercifully extending the time until His judgment so that more sinners have the opportunity to repent and turn in faith to salvation in Christ. God will judge sinners and those who refuse His Son will eternally burn in the Lake of Fire. America is committing the act of murder of the unborn and has established a law that gives sinful, silly women that godless right to do so; there are approx. 4,000 abortions a day in America (that's a lot of innocent blood crying out for God's justice). America glorifies in it's sins and justifies it by calling it “tolerance”. In God's eyes it is still sin and America will have to answer for it. Sin brings reproach that means that one becomes disgraced, dishonored, and defeated. We can say that about America today. The disgrace of our supposed leaders both politically and spiritually caught in adulterous affairs, homosexual perversions, embezzling, and taking bribes. We are a disgrace to other nations and we are lost honor and status to other nations. If it continues, I fear that the course we are on will cause our fall as a nation and defeat at the hands of other nations. From all that has happened in just the last 10 years to our nation testifies of a coming defeat. Because this nation and it's leadership openly defies God and seeks to go on without His help, God will abandon this nation to it's sins. The church in America can also be blamed for not making a moral stand against the evil that is taking over this nation. Instead of the church changing the world, the world is changing the church. Now, I know that not all churches have compromised and I thank God for that but we must stand in the gap for this nation, praying like we never have before, that America will turn back to the one, true God and Savior, Jesus Christ. Looking at the news about our economy, disasters (oil spill in Gulf, Katrina, 9/11, wild weather, etc.), and the no-win war in the Middle-East; I believe God is giving us a taste of what it can be like without His presence and blessing on our nation.

Can we be blessed again by God as a nation. Yes, we can, but we have to turn our hearts again to God in repentance and seek Him to heal our land. I'll end with this verse from 2 Chronicles 7:14 - “if My people who are called by My name will humble themselves, and pray and seek My face, and turn from their wicked ways, then I will hear from heaven, and will forgive their sin and heal their land”. I believe it's time to pray!